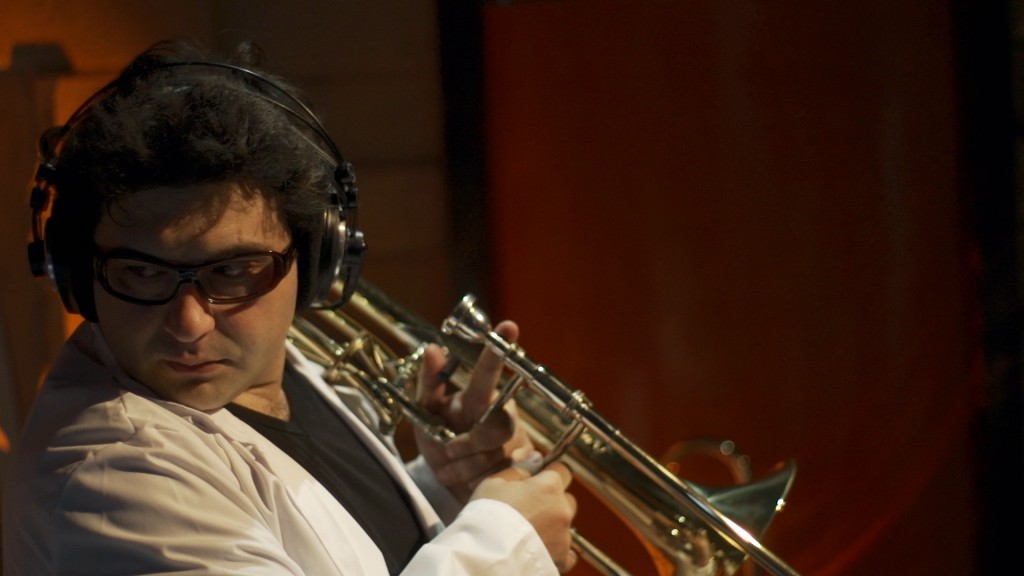 Nicola Ferro was introduced to music at a very early age by his family. He enrolled at the State Music Conservatory in Salerno and studied there until 1996 when he was awarded his Diploma in Trombone, achieving a very high mark, under the guidance of Maestro Antonio Marzullo and Maestro Roberto Bianchi. At the same time he also received his Secondary School Leaving Certificate (diploma di maturità) from Alfano 1° Secondary School, Salerno in Sociology/Psychology/Pedagogics.

He has taken part in varioius television programmes – as a trombonist – such as; ‘Domencia In’ 1998 Raiuno ‘I Fatti Vostri’ 1997 Raidue, partnering Antonio and Marcello and the ‘Mediterranea’ Orchestra. ‘La Sera dei Miracoli’ 1999, partnering Lucio Dalla, Gianni Moranti, Nino D’Anglelo and Mango with ‘La Nuovo Scarlatti’ Orchestra. He was also trombonist on Fred Buongusto’s show in 1997 as part of the ‘Mediterranea’ Orchestra. He also worked with Mariella Nava (1999) as part of the ‘Fonopoli’ Orchestra, Rome. In 2004 he recorded the cd ‘Specula& Gemini’ with the Jazz a Majella Orchestra, Naples, the music for which was written by Maestri Bruno Tommaso and Roberto De Simone, produced and distributed by Raitrade. He won the ‘Concorso Musicale Nazionale’ – Music on the Web – organised by Bresciaonline – Brecia – for two consecutive years. In 2002 there were 465 participants, in 2003, there were 600. As part of the ‘I Signori Chonda’ project, he composed and recorded 2 compilation cds under the Sony DADC label, City Records Milan. During the academic year 2004 2005, ?stato ed?? And in 2006 2007 he was Professor of Trombone and Trumpet at the State Music Conservatory in Salerno. He has also published a teaching book for the trombone called,’ Exercises with Mouthpiece TI68 published by Setticlavio di Salerno. He has been working with the singer Meg since 2005 and played on the cd ‘Psycoldelice’. Nicola Ferro has always been attracted by harmonies and by the various ways of arranging tunes of different musical types. Dedicating himself to Discographic Artistic Production, as well as to composing and to computerised music – studying under Maestro Roberto Altieri and then Maestro Bruno Tommaso, has allowed him to develop this passion; over the years he has gained freedom of expression as well as a thorough knowledge of musical expression.

Two of his original compositions, written for ‘Ensamble di Trombe’ and Virtual Group – ‘CONTRASTO’ and ‘HOT WIND’, are included on the cd ‘L’ANACORETA’ by A. Giuffredi, with Randy Brecker, produced and distributed worldwide by SUMMIT RECORDS USA DCED392. He has signed a contract as official composer and musical arranger for Alessi Publications, New York, for the first publication of the ‘Tetralogy of the sun’ project which consists of 4 musical scores for the trombone and piano which are dedicated to Joseph Alessi, first trombone in the New York Philharmonic. Over the years, He and Joseph Alessi have worked together on various musical projects.

He composed ‘Air of Manhattan’ for the 2007 summer tour in Japan of the brass quintet of the New York Philharmonic Two of his songs, ‘Sunset’ and ‘Daybreak’ are included on Joseph Alessi’s cd ‘Return to Sorrento’ which is produced and distributed worldwide by Naxos Records, code 8, 570232. He is currently on the Summit record label in the USA which has produced and published the ‘Create’ project in which he features as composer, trombonist, arranger, keyboard player, singer, computer programmer and artistic producer. ‘Create’ was nominated at the 2008 Grammy Awards in Los Angeles in the first 50 albums in the Field 10 category 45. He has also composed ‘Red Spain’ for Christian Lindberg and Joseph Alessi, a project for 2 trombones and electronic sounds which was performed for the first time in Valencia Spain on 15/04/2008. He is also a Music Ensamble teacher at the international summer courses at Spilimbergo (PN) Italy. He has been asked to play this autumn (2008) for the Valenciana Community Orchestra at the Palau De LesAarts de Reina Sofia in Spain.